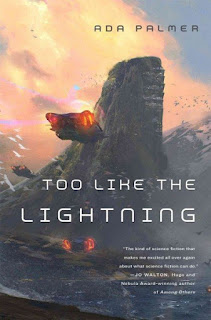 For the March meeting of Think Galactic, we discussed Too Like the Lightning (2016) by Ada Palmer.

Too Like The Lightning's been getting a lot of attention (we reviewed it pretty glowingly just a few months ago), with the added bonus that Dr. Palmer is Chicago-based, teaching history at the University of Chicago. She'd actually given a talk at 57th Street Books the day before our meeting, speaking about Too Like The Lightning and its just-released sequel, and a couple of us were able to make that.

In brief! Too Like the Lightning is set in the 25th century, with a few big science-fictional ideas (flying cars, non-geographic political bodies) and jammed to the gills with sociological & philosophical ideas, including doing some really cool things with gender and narrative style.

We really dug this! It was a small group, however, due to unexpected schedule conflicts, and we may be working in some brief Palmer discussion at our April meeting—so I'll keep the notes below extremely brief! Spoilers unlikely but possible:

Lots of discussion of how the narration works here—Mycroft is a certain kind of unreliable, confessional narrator. We brought up Liar as an example of a recent unreliable narrator (which we read last year), mentioned that Palmer cited Diderot's Jacque the Fatalist (1796) as a major inspiration for this style, and also talked about the effectiveness of addressing the story, in this case to a future reader.

So much talk about gender here! Couldn't write fast enough to record all our thoughts. Mycroft's shifting narration makes it a little hard to suss out how deeply this society is truly genderless. 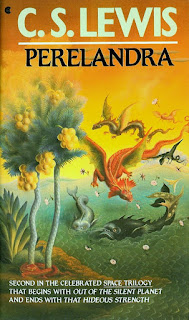 One idea that I was playing with through our discussion was whether or not Mycroft is using some kind of "gender essentialist" reasoning, which is a term one doesn't usually think of—not that gender is tied to biological sex, but rather that there's some kind of "pre-biological gender" in the world itself...we brought up ideas like Taoist yin/yang, and some of the ideas about sexless masculinity/femininity that Lewis played around with in the Space Trilogy—which I think is pulling on Thomistic thought? Have to fact check.

Also got a kick, again, out of discussing this as the next step in the Great SF Gender Discussion, drawing a line from Left Hand to the Ancillary books to this.

MUCH discussion about the Hive structure and how all that works; realized we were actually a bit unclear on how the Blacklaw/Greylaw/Whitelaw maps onto the Hive/strat/etc. affiliations. We liked that the laws here seems very complicated and thought-out, with lots of different Venn diagrams overlapping.

We liked the bash' structure a lot! Compared somewhat to the idea of a karass, as well as just less hiearchical/nuclear social units.

Much intrigue about what the set-sets are all about! Noted that they work super-well because we meet Eureka (who seems very human) long before Faust declares that they're "not Human".

We wondered a lot about how the larger world works—how post-scarcity this world really is, what kinds of work is being done by the average person. Noted the importance of celebrity culture, particularly Sniper's character (reminded of The New Boyfriend from Kelly Link's Get In Trouble, which we read last year).

Other quick thoughts, quickly recorded:
These are only the most cursory of notes—our discussion was wide-ranging, and I'm sure this is a book we'll be talking about for a while. You can keep up with Think Galactic on their website, Facebook, and Goodreads.